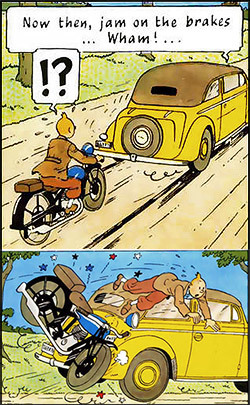 And this is why you always wear a helmet, folks.
"If I am escaping in a large truck and the hero is pursuing me in a small Italian sports car, I will not wait for the hero to pull up along side of me and try to force him off the road as he attempts to climb aboard. Instead I will slam on the brakes when he's directly behind me."
— #134 on the Evil Overlord List Cellblock A
Advertisement:

During a Chase Scene, this happens when the pursued suddenly brakes in order to make the pursuer run into him. Well, for most of the time, it works if the vehicle being pursued is larger than the one following it, as the pursuer may not react fast enough and would end up being injured in the process.

A variation on this is Dodge by Braking where the pursued driver doesn't let the other car slam in; he just brakes and lets the other vehicle speed by, meanwhile turning around and going back the way he came.