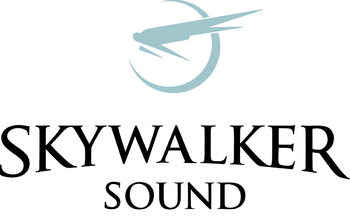 You can start humming the Star Wars theme now.

is a post production sound studio, named after the most prominent family of Star Wars protagonists. Originally known as Sprocket Systems, the company was founded in 1975 by George Lucas and brought the rise of many Stock Sound Effects after A New Hope, most noticeably in the revival of the Wilhelm Scream and Vader Breath.

They, along with sister companies Industrial Light and Magic and the now-defunct LucasArts, are currently owned by Disney. A more comprehensive list can be seen here

The films, series and video games Skywalker Sound has taken part in include: