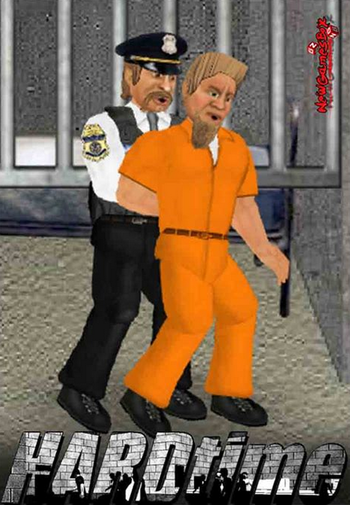 "I find you GUILTY and sentence you to 50 days in Southtown Correctional Facility! That may not be 'long' time but it will be HARD time! You'll be lucky if you survive...I'm now handing you over to the wardens, and they'll help you settle into your new home..."
— The Judge
Advertisement:

HARD Time... is a game made by Mat Dickie (otherwise known as MDickie, the creator of the infamous Author Tract game The You Testament). The game, touted as a "Prison Simulator" takes place 20 Minutes into the Future where you're a criminal locked up in a jail/rehabilitation center for the express purpose of trying to reform you and make you an outstanding citizen once again. However, as the criminals here are very violent, as well as the guards watching over you, that might be easier said than done.

The game was made in 2006 and while not as big as The You Testament, it still has its fans (due in part to its reintroduction to internet gamer culture by Nerd³). It received a Bowdlerised iOS remake in 2013 and two years later a sequel that takes place in school.