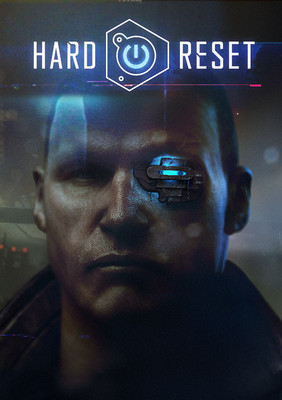 Hard Reset is a PC-exclusive First-Person Shooter from developer Flying Wild Hog, released on September 13, 2011. The game is a modern take on classic shooters, emphasizing old-school elements such as health pickups, carrying lots of guns at once (well, sort of), and fast-paced action and movement.

The game takes place in the year 2436. Humanity has been nearly wiped out by rogue robots, and the last safe haven of humanity, the city of Bezoar, has been breached. The player assumes the role of Maj. Fletcher, of the city's security corporation, CLN.

The game originally came out short and with No Ending, but the developers remedied by releasing Exile, a free DLC that completes the game, and the Extended Edition including both the base game and the DLC has become the "regular" one.

In 2016, the game got a Updated Re Release as Hard Reset Redux.