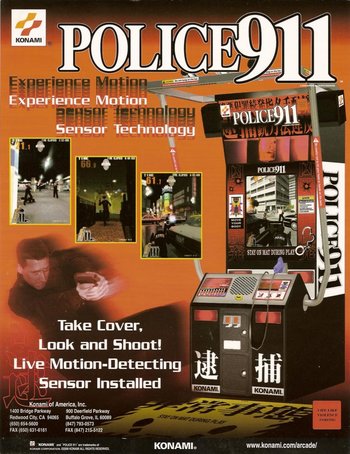 "The mega city of Los Angeles where crimes such as burglary, mugging, assault, homicide, and smuggling occur. This game begins when police gain information on the illegal activities of a gang of Japanese mafia, the Gokudo-kai, who plan to smuggle weapons into Japan from America. The game illustrates the work of the brave police officers as they struggle against organized crime syndicates whose activities jeopardize lives of ordinary citizens."
— Opening Narration
Advertisement:

Police 911 is a Light Gun Arcade Game made by Konami, about a police officer either in the LAPD or the Tokyo Metropolitan Police against an international Yakuza organization called Gokudou-kai. It is a spin-off from Lethal Enforcers.

The first game has been ported to PlayStation 2.