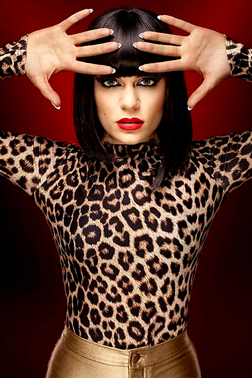 Jessica Ellen Cornish (born March 27, 1988) a.k.a. Jessie J is a British singer and songwriter who burst onto the UK pop scene in late 2010 with her hit single "Do It Like a Dude." Since then she has been on the covers of several magazines, garnering attention for her weird dress style, ever-changing hair colour and distinct sound. Her second single, "Price Tag," featuring B.O.B., gave her worldwide success. She has written for artists such as Justin Timberlake and Rihanna. She won the Critics Choice Brit Award in 2010 and since then has gone on to win in several others during 2011; such as the MOBO awards, the Capital FM awards, the Urban Music awards, the Radio 1 Teen awards and the BT Digital Music awards. Jessie J was also nominated for Best UK and Ireland Music Act in the 2011 MTV Europe Awards.
Advertisement:

In addition to her own catalog, she also wrote the Miley Cyrus song "Party in the USA."