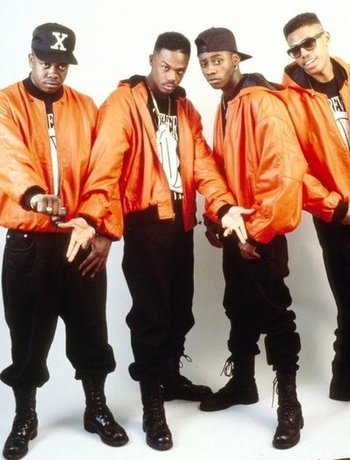 Jodeci is an American R&B quartet whose members consists of two sets of brothers from Charlotte, North Carolina: the DeGrates (Donald [DeVante Swing] and Dalvin [Mr. Dalvin]), and the Haileys (Cedric [K-Ci] and Joel [JoJo]).

All of the brothers were raised in heavily Pentecostal families, with the Haileys releasing several gospel albums as children, and the DeGrates touring with their family. Through a mutual acquaintance, the duos eventually met, and decided to pursue musical careers together. After several failed attempts by DeVante to audition for Prince at Paisley Park, he returned to Charlotte, and began working with the rest of the group, improving his production and songwriting. By this point, the group eventually formed into Jodeci, and began crafting demos for record labels.

Traveling to New York in 1991, the group managed to arrange an impromptu audition with MCA's Uptown Records division. Uptown founder and president Andre Harrell was skeptical of the high quality production on their demo, and asked Jodeci to perform acapella in front of label A&R Jeff Redd. Heavy D, then the label's vice-president, overheard the performance, and convinced Harrell to sign the group. Sean Combs, one of Uptown's A&R's at the time, helped the group develop their image, wearing the street clothes and hats that were popular among hardcore hip hop artists instead of the typical refined suits that R&B artists usually wore, helping them stand out.

In May of that year, Jodeci released their debut album Forever My Lady. A somewhat gritter and more sensual take on Teddy Riley's New Jack Swing sound, it was met with critical and commercial success, selling over 3 million copies, and spawning several Pop and R&B hits, including "Come and Talk to Me", "Stay", and the title track, helping usher in the Hip Hop Soul sub-genre. 1993's Diary of a Mad Band saw similar success, but its release was mired by a feud between the group and Uptown, culminating in the group signing with Suge Knight's "West Coast Management Firm" alongside Mary J. Blige to increase their royalties and creative control, and threatened to sign with Death Row outright. In response, Uptown barely promoted the album, though its success rendered the sabotage moot. The group released their third album, The Show, the After-Party, the Hotel in 1995, before taking a break, and focusing on either side projects or writing and producing for other artists.

In 2015, 20 years after their last album, the group returned to the spotlight, and released the Timbaland-produced The Past, the Present, the Future through Epic Records.

No, neither JoJo, or the group in general are Joestars, though "Freek'n You" gained the group memetic status among the JoJo fanbase after being the first closing theme for Golden Wind's anime adaptation, to the point where a Japanese-only greatest hits collection with JoJo cover art

was released with several exclusive remixes. JoJo Hailey should also not be confused with fellow musician Jojo.

(This article is currently a stub and needs Wiki Magic Love.)