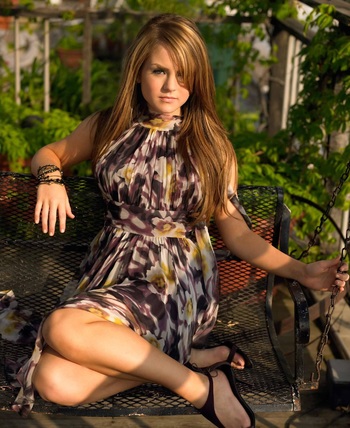 That's not what I want, baby it's you

Joanna Noëlle Blagden Levesque (born December 20, 1990 in Brattleboro, Vermont), professionally known as JoJo (2003-Present), is an American singer and actress from Foxborough, Massachusetts. After competing on the television show, America's Most Talented Kids, she was noticed by record producer Vincent Herbert who asked her to audition for Blackground Records.

Her debut Self-Titled Album came out in 2004 and sold very well; this is quite remarkable given that she was merely 13 to 14 at the time. Her song "Leave (Get Out)" sold platinum in America on the RIAA charts. She released her second album The High Road in 2006. The album had a hit single called "Too Little, Too Late" and was certified Gold by the RIAA. It seemed that she would be one of the most popular pop acts ever...

...until Development Hell took place for her 3rd album. After several years of Executive Meddling, pushing the album back several times, renaming it, and so many more troubles, she decided to release a mixtape called Can't Take That Away from Me on Rap-up.com for her fans. This featured a promo single called "In the Dark" which was her first real experiment with a Hotter and Sexier image. She went on to release "Disaster", and a second mixtape called Agape in 2012. It featured a single called "Andre" inspired by one of her favorite artists.

She is known for her songs, "Demonstrate", "Leave (Get Out)", "Andre", "Too Little Too Late", "Disaster", "The Other Chick", "In the Dark", "How to Touch A Girl" and "Baby It's You". She also indulges in doing replies to famous songs such as "Beautiful Girls Reply" and "Marvins Room". These are usually to immense critical praise. She focuses on getting mix tapes out to her fans, continuing working on her third album, working with her management and recording company about album number 3 and other projects. She moved from Blackground to Atlantic in late 2013, early 2014 for her third album to finally be released. The #LOVEJO EP came out Valentines Day 2014.

She has experimented with films and acting in movies such as Aquamarine and RV: Runaway Vacation.

Not to be confused with the people of the same nickname who went on bizarre adventures (which she has actually referenced), the archenemy of The Powerpuff Girls, or fellow singer and Jodeci frontman JoJo Hailey.

Despite rumors to the contrary, she is unrelated to WWE's on-screen COO Paul "Triple H" Levesque.

Tropes Present In this musician