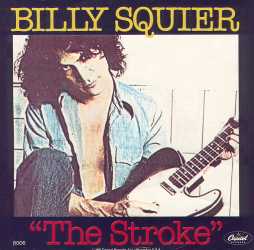 "Get around town, spend your time on the run
You never let down, say you do it for fun
You never miss a play, though you make quite a few
You give it all away, everybody wants you"
—Billy Squier, "Everybody Wants You"
Advertisement:

William Haislip Squier (born May 12, 1950) is an American rock singer who enjoyed significant success at the start of The '80s before derailing his career with a music video that qualifies as one of the most notorious bad decisions of all time.

Inspired by Eric Clapton, Squier became the lead singer and guitarist of a rock group called Piper in The '70s, whose self-titled record was once praised as the greatest debut album by an American rock and roll band. He went solo on the basis of this success, putting out well-received records that blended pop sensibilities with Hard Rock and scoring hit singles with songs like "The Stroke" and "Emotions In Motion". For a while, he was one of the most popular solo rockers in America.

Ironically enough, Squier's biggest hit ended up harming his career quite badly. "Rock Me Tonite" was accompanied by a music video directed by Kenny Ortega, which infamously featured Squier dancing about in a pink tank-top. As one might expect, it undermined the tough guy image he'd worked hard to cultivate, and alienated a lot of his fans. His career stalled, and although he remained moderately successful throughout the eighties, he never quite recovered the fame he'd experienced at the start of the decade.

Since then, he's exited and returned to the music industry and played with Ringo Starr and His All-Starr Band.