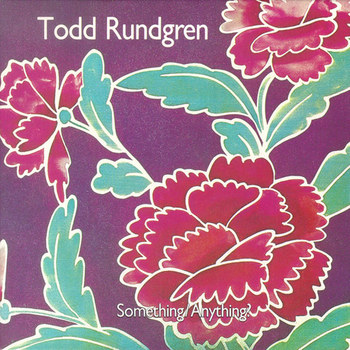 The 1972 double album Something/Anything? is Todd Rundgren's third and most successful album as a solo artist.

Though heavily influenced by the Singer-Songwriter movement - Laura Nyro in particular - different songs range into psychedelia, Motown Soul, Power Pop, early Synth-Pop, and even opera. Perhaps unsurprisingly, the Something/Anything? sessions involved copious Ritalin use by the singer. Rundgren played every instrument on the first three sides, but after an earthquake struck his Los Angeles studio, Rundgren set up live sessions in New York City and at his upstate Bearsville studio to complete the final side with a rotating series of session players chosen for him by keyboardist Moogy Klingman.

The commercial and critical success of Something/Anything? was something of a double-edged sword for Rundgren, who set out immediately to avoid being pigeonholed as a Singer-Songwriter on the Progressive Rock-tinged followup A Wizard, A True Star, aiming away from the pop mainstream towards cult status. Paradoxically, this ensured that Something/Anything? would remain his best-known release. The album was listed at #173 in Rolling Stone's 500 Greatest Albums of All Time and spawned the major hit singles "I Saw the Light" and "Hello It's Me". "Couldn't I Just Tell You" subsequently became a Power Pop classic that served as a major influence on subsequent works in the genre.

Side One: "A Bouquet of Ear-Catching Melodies"

Side Two: "The Cerebral Side"

Side Three: "The Kid Gets Heavy"

Side Four: "Baby Needs a New Pair of Snakeskin Boots (A Pop Operetta)"

Before we go any further, I'd like to show you a tropes list I made up, and one can be made for any album, even this one:

Now all you have to do is find these tropes on the record, and whoever finds the most wins, of course!