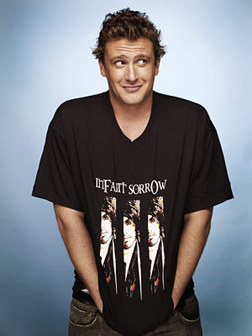 Jason Jordan Segel (born January 18, 1980 in Los Angeles, California) is a very tall and very funny actor and writer. He is best known as Marshall Eriksen on How I Met Your Mother and as the lead in Forgetting Sarah Marshall, which he also wrote. He is also known for working with director/producer Judd Apatow, most notably in the short-lived TV shows Freaks and Geeks and Undeclared, and the movies Knocked Up and Forgetting Sarah Marshall.

He starred in and wrote the 2011 film The Muppets. Those who find this strange should remember the Dracula Puppet Musical from Forgetting Sarah Marshall, which he also wrote.

He also co-wrote the Infant Sorrow music for the movies Forgetting Sarah Marshall and Get Him to the Greek.

He makes anything he appears in much, much better, especially if he sings or plays music.