Film / Jeff, Who Lives at Home 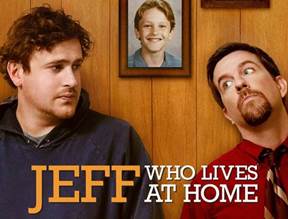 "Everyone and Everything is interconnected in the universe. Stay pure of heart and you will see the signs. Follow the signs and you will find your destiny."
— Jeff
Advertisement:

Jeff, Who Lives at Home is a 2011 American indie dramedy film starring Jason Segel and Ed Helms about the most life changing day in the lives of two brothers and those close to them. Susan Sarandon and Judy Greer co-star as their mother and Helms' wife respectively.

Jeff Thompkins is a serious slacker, still living with his mother, who is constantly belittled by his older brother, Pat, for not doing anything with his life. Pat, on the other hand, has made a somewhat successful career in business; though due to his short temper and low emotional-range, is on the verge of a divorce with his wife. Their mother meanwhile, is coming to a mid-life crisis and woes over the fact that she hasn't known romance in so long, though she seems to find excitement in her office from the most unexpected of places.

The film begins as Jeff gets a call from his mother to get glue to fix a broken shutter. Jeff, who believes his life works in signs from the universe, leaves the house to get the glue, but is distracted by a similar pattern of names. On his way, he meets up with his brother who then pursuit Pat's wife together, who seems to be involved in an affair.

Due to its overall mood, the film would normally be considered a drama, but is made lighthearted sheerly by the "two comedy guys", Pat and Jeff.