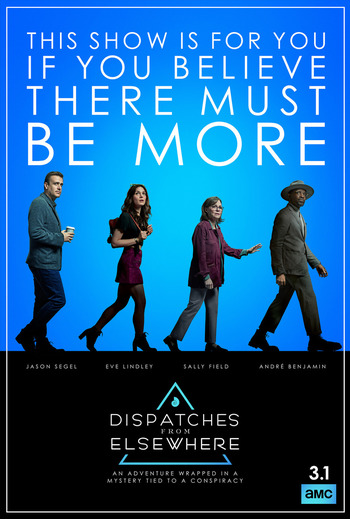 We all share one common wish — a secret, one rarely uttered but more universal than any hope ever hoped — that one day it will be revealed that there's been a mistake. That one day you will learn that you are meant for more. That one day someone will arrive from the mundane nothingness and say the words: "No, my friend, not you. You don't belong here. Come with me. You belong with the special ones."
— Octavio Coleman, Esq.
Advertisement:

2020 mystery anthology series, created by, produced by, largely written by, and starring Jason Segel and airing on AMC.

A group of four very different people (Segel, Sally Field, Andre Benjamin, and Eve Lindley) find themselves drawn out of their dull, mundane lives when they each discover clues leading them into a mysterious puzzle involving the bizarre Jejune Institute; its head, Octavio Coleman, Esq. (Richard E. Grant); and its nemesis, the Elsewhere Society. Elsewhere's leader urges them to search for a missing girl named Clara, who is important to the Society's work for reasons left vague, before Coleman can find her. They attempt to follow the instructions they are given and unearth the truth about the Institute, but the mystery winds deeper than they ever imagined — in fact, it's entirely up in the air as to whether they've entered an extremely elaborate Alternate Reality Game, fallen into a Government Conspiracy, or stumbled onto honest-to-God magic.

Based on The Institute, a 2013 documentary covering a real-life ARG in San Francisco that began in 2008 and ran for several years — although Segel has switched the scene to Philadelphia. The ARG's real-life director, Jeff Hull, is a consulting producer on the series.

Dispatches from Elsewhere provides examples of:

"Behind this world, there is a world which has been hidden from you."