Film / Curse of the Headless Horseman 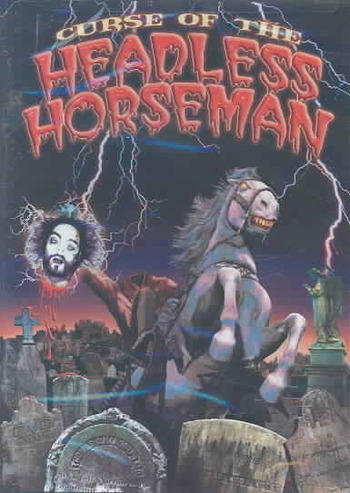 Curse of The Headless Horseman is a 1972 horror film written by Ken Riche and by John Kirkman.

Mark Callahan (played by Marland Proctor), a young physician, was just informed by his family’s attorney that his uncle died, leaving him a ranch. The stipulation of the will is that Mark has to get the ranch to turn a profit in six months or he loses the rights to the property. So Mark, his hippie friends, and his fiancée Brenda (Claudia Reame) head out to the old place to check it out. It turns out that the old ranch is a more of a Wild West theme park, complete with gun-toting re-enactors. The ranch also comes with a creepy old caretaker and semi-professional doomsayer named Solomon (B.G. Fisher) who tells a creepy (yet totally vague) tale about a headless horseman.

One of the hippies gets an idea about how Mark can turn the old ranch into a tourist hotspot by having themselves perform for the entertainment of tourists. No sooner is this plan put into action then a headless horseman shows up terrorizing and bringing about the deaths of some hippies. Who is this mysterious headless messenger of death? Is he a supernatural being from Hades or does this joker just want to scare the Mark and his friends off the property for some other reason?