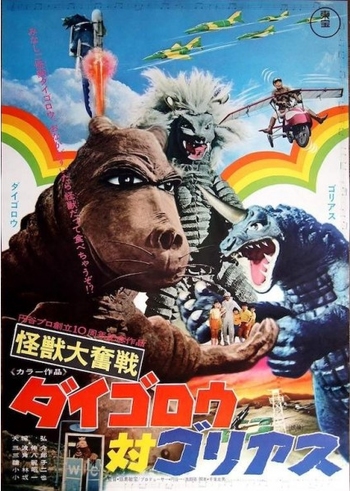 The movie's story center's around the titular Daigoro, a pot-bellied, hippopotamus-like monster whose mother was killed by the Japanese Self-Defense Forces. The orphaned kaiju was raised a lone man who had taken pity on the lonely infant and hid it from the JSDF on a remote island. However, this peaceful existence soon becomes threatened by two issues — the growing Daigoro's increasingly expensive nutritional requirements, and the appearance of the much less friendly secondary monster in the title, Goliath. Now humanity's only hope against this terrible threat is the gentle Daigoro, who will have to learn to fight if he hopes to stand a chance against Goliath.

Daigoro vs. Goliath was originally released for the Toho Championship Festival, a seasonal children's film festival set up by Toho Studios during the 70s as part of their attempts to resurrect the Godzilla franchise with a more children-focused direction as movie theater attendance declined. Many of Godzilla's later Showa outings, like All Monsters Attack and Godzilla vs. Megalon were shown at these festivals, alongside edited-down versions of older Toho movies, animated films, and compilations of Ultra Series episodes.