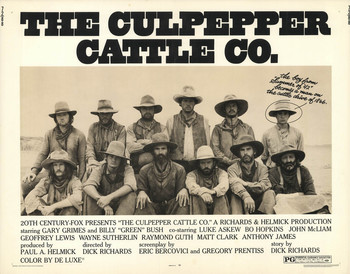 Kid, cowboying is something you do when you can't do nothing else.

The Culpepper Cattle Co. (known as Dust, Sweat and Gunpowder in Australia) is a revisionist western made in 1972. It's directed by Dick Richards.

It tells the story of Ben, a boy who believes in the romantic ideal of the cowboy and wishes to become one. He joins a cattle drive led by the jaded Culpepper, hoping it'll be the first step to accomplishing his dream. But Ben eventually comes to realize that real cowboys are more concerned with profits than heroics and that a reward for the latter is exceedingly rare.