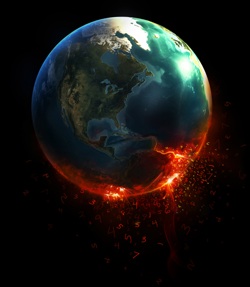 A common Film Poster meant to shock and attract a viewer, the Earth Shattering Poster features the planet Earth being destroyed in an Earth-Shattering Kaboom, usually with tectonic cracks all along the edges that glow a volcanic red. Occasionally, it's because a gigantic hand, possibly alien and definitely evil looking, is crushing it. Other variants include the Earth being zapped with a Death Ray, or having a meteor colliding against it.

Needless to say, if the planet ever actually has this happen to it in the film it wouldn't be a case of Inferred Holocaust; it would be an outright planetary catastrophe that would cause a Class 5 Apocalypse How.

See also Got the Whole World in My Hand, Apocalyptic Montage.