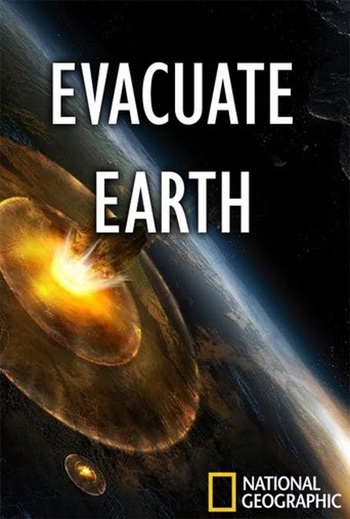 "This is a crazy thing to think about. It seems like science fiction. The end of the world, no going back, we need to escape, we need to evacuate Earth. But it's really impossible to say that it will never happen."
— Dr. Caleb Scharf
Advertisement:

Evacuate Earth is a 2012 Speculative Documentary aired on the National Geographic Channel. The film discusses the idea of a Homeworld Evacuation, what might necessitate one, and what would be required to pull it off from a technological, logistical, and societal perspective.

These concepts are explored through the story of the Horizon Project, a decades-long effort to build an interstellar Ark and get some of humanity out of the solar system before a rogue neutron star arrives and destroys the Earth in seventy-five years.