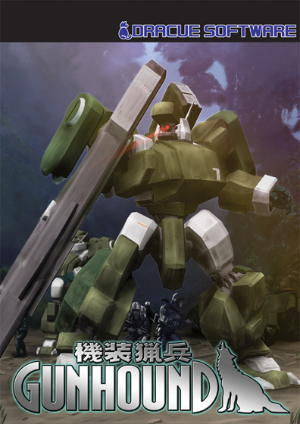 Armored Hunter GUNHOUND is a Run-and-Gun mecha game developed by Dracue Software and was released for Windows in Japan on December 18, 2009. The story is set amidst a battle for supremacy that has evolved into outer space with the world in chaos. There was a strong movement to unify the intentions of the people on Earth by establishing a government on the planet, while a dispute arose with those that migrated into outer space. When the government was founded, incidents of civil and political conflicts began from the world over. During these conflicts, one part of Asia was thrown into civil war as the nation was divided between those that wanted a unifying government and a monarchic army fighting for independence. The country was also as a prominent source of a powerful energy source called "neutron polymer", and fights broke out between forces with newly developed weapons and monarchic army gaining assistance from other countries. The governing side were attack by the opposing force's "Dread Tortoise", a giant battleship capable of transforming into a mobile neutron polymer fortress. After heavy sustaining casualties from the enemy, the government established an anti-battle corp of battle mechs, with three GUNHOUND soldiers — Eliza Taylor, Shin Ryuzaki, and Batisa Arbus Fisher — were dispatched in a battle against Dread Tortoise.
Advertisement:

The gameplay of Armored Hunter GUNHOUND was heavily inspired by likes of the Assault Suits series, however this game takes an arcade-styled approach of those games as players are encouraged to quickly dispatch enemies for higher score bonuses and each mission is under a time limit. Along the way, players can unlock various weapons as they accumulate score from their session, ranging from machine guns, anti-air cannons, a flamethrower, a grenade launcher, and more. Players can also customize the look of their mech by changing the colors of its armor, or if they are looking for a greater challenge, remove the armor plating from their mech altogether.

The game was originally released in 2009 as a doujin PC game and is available through DLsite's Japanese page. It was later remade as Armored Hunter GUNHOUND EX, which was co-developed by G.rev and was released for the PlayStation Portable on January 21, 2013 with an upgrade kit for owners of the original doujin release for free. The remake features a retelling of the game's original story, updated graphics, a new soundtrack, and more unlockable weapons. The PC version of Armored Hunter GUNHOUND EX was released overseas by Active Gaming Media through PLAYISM and Steam in 2014. The story of Armored Hunter GUNHOUND EX focuses on a war between countries during the late 21st century in a search of a renewable energy source to expand modern society rather than a battle between Earth and space. When neutron polymer was discovered, alliances were formed and quickly shattered between countries as they tried to get a hold of the resource. Veltonia, a small south-eastern Asian country, was caught in civil war when a concentrated deposit of neutron polymer was discovered, and soon became a world-wide battle. Juliane Yuri, Jason "Kid" Powell, and Commander Mikhail Karelin of the 9th Division Armored Hunter Unit "GUNHOUND" were sent in to quarrel the conflict.

Unfortunately, as of the temporary suspension

of Dracue Software, the EX remake of the game was removed from all digital stores, however the original Armored Hunter GUNHOUND can be purchased from the Japanese version of DLsite, but the EX upgrade tool for the game no longer works due to the developer's dissolution.