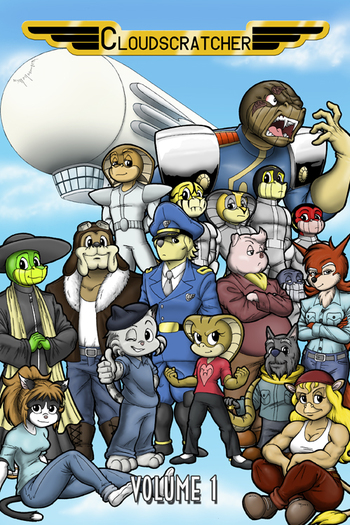 Cloudscratcher is a webcomic that takes place in a World in the Sky where civilization rests atop the highest mountains and broadest plateaus, which chronicles the adventures of a resistance movement who fly the airship Cloudscratcher in their fight against the serpentine Margoth Empire. The main characters are the easily-excitable cat mechanic Felix O'Connel and the child soldier-turned-defectee snake Ixia, with the rest of the crew consisting of The Captain... The Captain, first mate and "trump card" Alice Harper, pilots Burt Haggerty and Jacques Le Roux, Communications Officer Delia MacNamara, chef and primary muscle Sally-Jean Peterson, priest/doctor and fellow Empire defectee Sogaat and "apprentice mechanic" Scotty.

Up till now their main opponents have the overall ineffectual West Bravo, but when the Empire's so-called "hero" Borzax is placed in charge of West Bravo to whips things into shape and finish off the Cloudscratcher crew once and for all...

Cloudscratcher is written to be a Genre Throwback to the Talking Animal cartoons of the 80s and 90s from the likes of Disney and Don Bluth, with TaleSpin being the clearest influence. Speaking of high-flying Diesel Punk stories, the comic also draws heavily from the Crimson Skies series.