Anime / The Legend of Black Heaven 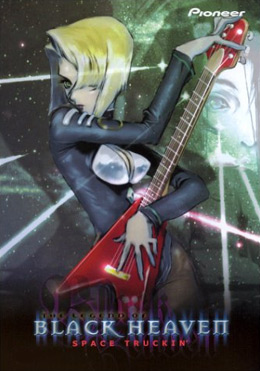 At first glance, this 12-Episode Anime from 1999 — originally known as Kacho Oji (課長王子), either "Old Section Chief", "Prince Section Chief", or "Section Chief Oji" — is about how Oji Tanaka, a jaded and distracted office worker who doesn't seem to get much enjoyment out of life, meets Layla Yuki, a hot new coworker. But wait, that's not all!

Layla Yuki is part of an alien army trying to defend outer space from another army. Her troops are losing badly, and even though they have an ultimate weapon, only Tanaka can operate it. In his golden days, Tanaka was better known as "Gabriel", the leader of a band called Black Heaven that was highly popular before a groupie (Tanaka's current wife, named Yoshiko, or just "Yokko") found she was pregnant with Tanaka's baby. His skills on the guitar are second to none, and for some reason, the ultimate weapon is powered by hardcore ass-kicking rock music.

Soon, Tanaka is trying to balance his rekindled love for playing the guitar despite Yokko getting angry at him for clinging to it, taking care of his family, trying to get the band back together, and fighting a war in outer space. At the same time, Layla's three subordinates get the cast wrapped in some rather wacky hijinks.

The series was released in English by Geneon (as Pioneer). Discotek Media announced that it'll see a rerelease it North America with a Blu-Ray release.