Manga / The Legend of Mother Sarah 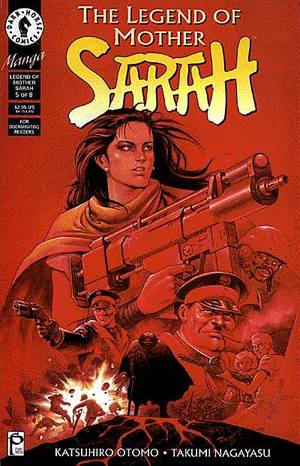 Sigourney Weaver has nothing on her.
Advertisement:

Another Katsuhiro Otomo hit manga, The Legend Of Mother Sarah was written by the creator of AKIRA but was drawn by Takumi Nagayasu from 1990 to 2006.

In a dystopian future, the Earth has been utterly poisoned by nuclear warfare and, even though there are still people living there, most of humanity has fled onto satellites to live tranquilly away from the devastated planet, now nothing but a wasteland.

However, one day, a scientist came up with a new invention: a massive but environmentally clean bomb that could actually make the Southern Hemisphere of the planet a land of prosperity for humanity while burying the radioactive Northern Hemisphere under snow and ice. The existence of this bomb initiated the endless war between opposing factions Epoch and Mother Earth who want to decide whether or not to use that bomb. A conflict that slowly but surely contaminated the tranquil space colonies and sparked a massive exodus back to Earth from the people living in the satellites orbiting around the Earth.

Sarah, a mother of 4, used to live peacefully with her family in the satellites that orbited around Earth until one of the numerous terrorist attacks shaking the satellites forced her back to Earth. In the debacle, she got separated from her husband, Bard, and 3 of her children: Harato (her firstborn son), Satoko (her daughter) and Tsumuri (her middle son) but kept her baby boy Kazuki with her.

Flash forward 10 years later. Roaming the inhospitable wastelands of Earth, Sarah is now searching for her children, accompanied by her sidekick Tsue, a truck-riding merchant who took her in. And she won't stop until she has found all 3 of them.

The series is now mostly out-of-print but it can be found online and used copies of it are available. The series was also an oddity for its time since it's technically a Seinen (and not a Josei) but it features an adult woman and covers many themes related to childhood, childbearing and motherhood in general, along with wartime realities, soldier kids, survival and religion.

The series presents the following tropes: