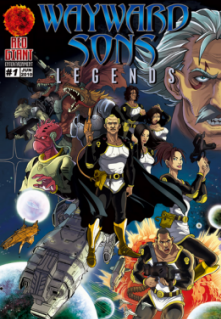 Wayward Sons is a Webcomic written by Benny R. Powell (aka Wizbenny), that while mainly sci-fi, contains elements from multiple genres. Though it begins with the Pantheans having just prevailed in a bloody civil war, things go quickly awry while the Pantheans attempt to imprison the traitorous Kronos and a multitude of monstrous intergalactic criminals.
Advertisement:

Now the crew of the Ulympea, led by Captain Suras, must do whatever it takes to stem a full-scale prison break. What happens next, however, is completely unexpected, and the planet they end up visiting will never be the same again...

The comic stopped being updated in November 2013. It can be found here

Tropes found in this webcomic: