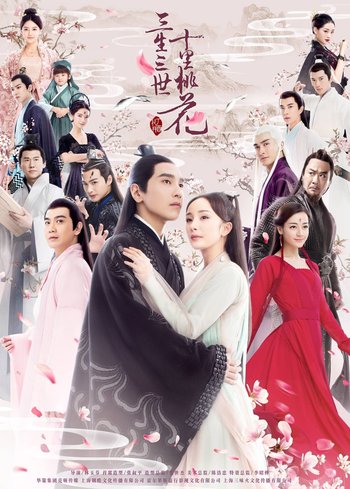 Ten Miles of Peach Blossoms (三生三世十里桃花, Sān Shēng Sān Shì Shí Lǐ Táo Huā, literally "Three Lives, Three Worlds, Ten Miles of Peach Blossoms") is a 2017 Chinese fantasy/romance series starring Yang Mi and Mark Chao. It's based on the novel of the same name by Tang Qi. It is also known by the title Eternal Love — which is, confusingly, also the title of a different Chinese series.

Bai Qian, daughter of the Fox King, goes to Kunlun Mountain to become a disciple of Mo Yuan. While there, she gets caught up in a war between Celestial Tribe and Ghost Tribe. The Ghost King is sealed away, but years later he is about to escape his prison. Bai Qian tries to seal him away again, loses her memories in the process, and goes to the mortal realm. Meanwhile, Ye Hua, Crown Prince of the Nine Heavens, is sent to the mortal realm. He's warned that he must not get involved with any mortals. Then he meets Bai Qian.

As of 2018, it's the most-watched television series in China. A sequel/spin-off series, Three Lives, Three Worlds: The Pillow Book (also called Eternal Love of Dream), aired in 2020. The source novel has also been adapted into a 2017 film, Once Upon a Time (2017), and a 2019 series, Love and Destiny.

The series can be watched on YouTube with English subtitles