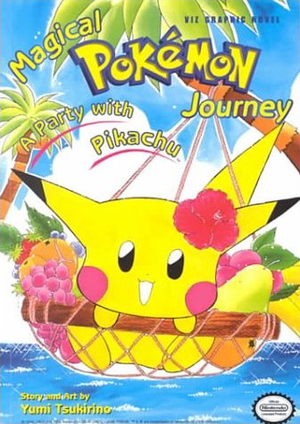 Magical Pokémon Journey (Pocket Monsters PiPiPi Adventures in Japan) is a Shoujo manga created by Yumi Tsukirino, set in the Pokémon universe. It was serialized in Ciao from 1997 to 2003.

The story centers around a girl named Hazel who develops a crush on Almond, a Pokémon Trainer from whom she is constantly rebuffed. To receive a Love Potion from a scientist named Grandpa and thus gain Almond's affection, Hazel agrees to catch Pokémon for his research.

This series chronicles Hazel's attempts to make Almond like her, as well as her friendship with several Pokémon she meets — mainly Pikachu, Clefairy, and Jigglypuff (Pikachu, Pippi, and Purin, for whom the series was named) — and her rivalry with Grandpa's granddaughter, Coconut. Gradually, the focus of the series shifts away from collecting Pokémon and more to the relationship between Hazel and Almond, as well as the relationships between other human characters, between Pokémon, and the friendships of both humans and Pokémon.

Tsukirino also wrote a sequel entitled Pokémon Chamo Chamo Pretty, which is a very loose adaptation of Pokémon Ruby and Sapphire. Both series are complete.