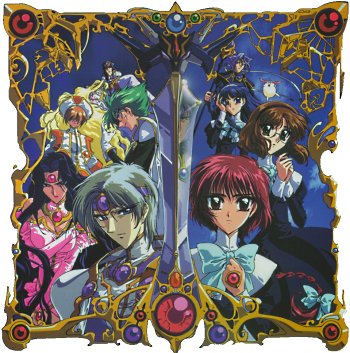 An OVA loosely based on the Magic Knight Rayearth saga. While there were similar elements that were in the original show, it was executed differently enough to be another story altogether.

Our three heroines, Hikaru Shidou, Umi Ryuuzaki and Fuu Hououji, attended the same school this time around. They made a vow under a cherry blossom tree together that they will stay as friends together even if they're apart. Said tree was rumored to have a certain fairy that granted wishes, but rumors would stay rumors. Their school life was almost at an end... but unfortunately Umi and Fuu would have to leave due to their parents making plans to live in another place, leaving Hikaru alone. All three, especially Hikaru, were fearing that they would never see each other again.

And suddenly, weird things started to happen. The rumored fairy, taking form of a fluffy rabbit-like creature called Mokona, make an appearance, and only the girls could see them. Then time suddenly stopped and people started disappearing except the girls. And then there's this man with weird clothing named Clef appearing and while he's friendly, there is a hostile sorceress named Alcyone trying to kill the girls; and that was just the beginning. According to Clef, his dying homeland of Cephiro has made an attempt to merge with the real world, and in order to stop them, the girls have to revive the Rune Gods sleeping somewhere within Earth (and one of them, Lexus, already contacted Hikaru) and stop the merging of two worlds.