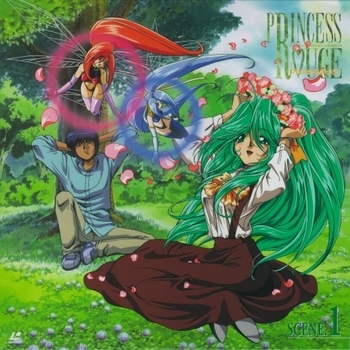 Yusuke is your average high school student, orphaned and living alone in a small cramped house. One day, he ends up being Late for School, and starts rushing off on his bike. But a storm starts to brew, and out of it falls... a beautiful green-haired girl. This girl, who can only remember her name (Rouge), is taken in by Yusuke. But Rouge's sisters from the Underworld come to take her back, and things spiral out of control from there.

A two-episode anime OVA series produced by JC Staff for episode one and Front Line for episode two, Princess Rouge (known in English as Legend of the Last Labyrinth) was originally planned for a six-episode series, and was designed as a project to let aspiring animators, directors and voice actors cut their teeth, but funding ran out, and as such, the six-episode story was cut off at two, leaving literally no conclusion to the story of any kind.

This anime was released on both DVD and separately dubbed and subtitled VHS tapes by Media Blasters in 2000, but both of those releases are now out-of-print. They fetch for cheap prices on places like Amazon, though, so the option is still out there.