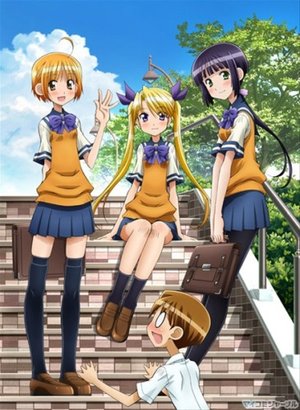 Nao Takanashi is an ordinary junior high school girl who — title notwithstanding — really likes her older brother Shuusuke (though he is unaware of this), who turns out to feel the same for her, but manages to hold himself back out of respect for their relationship.

One day, whilst purging her brother's Porn Stash of anything not related to Brother–Sister Incest, Nao comes upon a family photo album full of childhood photos of Shuusuke and a girl in pigtails, but without her. When she confronts her parents, they tell her the truth: ten years prior, their close friends perished in a car accident, leaving Nao, their daughter, the sole (albeit amnesiac) survivor. But instead of angsting over the fact that she and Shuusuke are Not Blood Siblings, she's elated that she can finally pursue a full-fledged relationship with him. However, a blonde girl in pigtails appears shortly thereafter... and all hell breaks loose.

I Don't Like You at All, Big Brother!!, (Oniichan no Koto Nanka Zenzen Suki ja Nai Dakara ne!!) is a romantic comedy manga by Kusano Kouichi, which ran in the seinen publication Web Comic High! from 2008 to 2016. It has an anime adaptation that first aired in the Winter 2011 Anime season. The manga has been licensed by Seven Seas Entertainment.