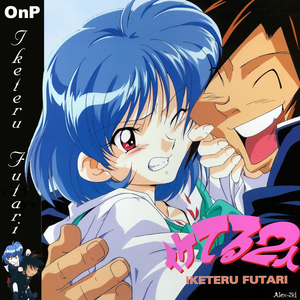 Iketeru Futari (lit. "The Cool Couple") is an ecchi Romantic Comedy manga series by Takashi Sano. It was serialized in Young King Comics from 1997 to 2010.

It details the life of Keisuke Saji, a typical high school student who's desperate for a love life. While "borrowing" his father's cell phone one day, he receives an anonymous message telling him to meet a girl named "Alice" later that night. Alice describes herself as a beautiful brown-haired student who's willing to get paid for certain activities.

When he arrives at the destination, Saji finds a girl who fits the description getting harassed by various men, but realizes her voice isn't the same one he heard on the phone. When Saji notices another girl laughing, he talks to her and recognizes her voice, realizing that she's the one who set up the calls. It's Akira Koizumi, a short blue-haired girl who goes to the same school as Saji. Distressed that someone found out her secret, she takes Saji on a walk around town, where he buys her a small ring. As thanks, she has sex with him, giving up her virginity in the process.

Drawn by Koizumi's mysterious life and cute body, and the fact that she was the first girl to jump his bones, Saji falls madly in love with her. What follows next is Saji trying to convince Koizumi that she feels the same way about him. However, she is a Tsundere of the harshest type, and refuses to admit she has feelings for him. Meanwhile, Saji has to deal with a big-breasted jealous childhood friend, a homosexual young boy in love with him, a boy/girl twin duo both in love with Koizumi, and much more.

The manga is quite explicit. Bare breasts can regularly be seen, and there is a lot of fanservice. Sex scenes are explicit, but not graphic or drawn out. An anime adaptation consisting of 16 episodes aired in 1999. Each episode is five minutes long. It keeps the humor and story of the early chapters, but tones down the sexual references.