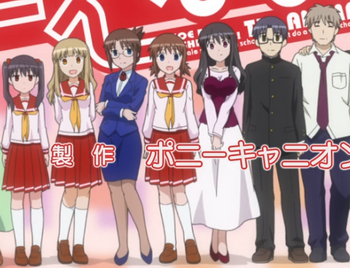 Koe de Oshigoto! (or Voice Work!) is an ecchi comedy/romance manga by Konno Azure. It was serialized in Comic Gum from 2008 to 2013.
Advertisement:

The story begins with Kanna Aoyagi, who on her 16th birthday is asked by her older sister Yayoi to help out at her game company. She neglects to mention said company produces eroge and that she wants her little sister to become their resident voice actress. Kanna knows little to nothing about sexuality, let alone H-games, so she is less than thrilled at first. Nevertheless she goes along with it, partly for her sister's sake and partly because she has no idea what awaits her. Now she must learn how to be a good voice actress, while being extremely embarrassed by the different things she must say. At the same time she is struggling to keep her career a secret from her friends at school. Can she do the job properly while she is still innocent and inexperienced?

Related works include three Drama CDs, a Picture Drama and a two-episode OVA series; the episodes were released in 2010 and 2011.