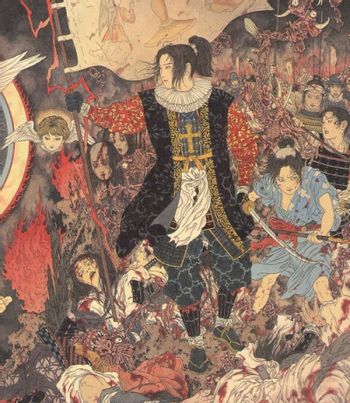 Amakusa Shirō (天草 四郎?, 1621? – April 12, 1638) also known as Amakusa Shirō Tokisada (天草四郎時貞?) was the teenage leader of the Shimabara Rebellion. With time, he has become a staple of Japanese culture - specifically, of the Jidaigeki-based fiction.

According to The Other Wiki, Shirō was the son of former Konishi clan retainer Masuda Jinbei (益田 甚兵衛?)... though according to some sources, he may have been the illegitimate son of Toyotomi Hideyori. He was born in modern-day Kami-Amakusa, Kumamoto in a Catholic family. At age 15, the boy was charismatic enough to be known to his followers as "heaven's messenger." Miraculous powers were attributed to him, like healing and being able to walk on water.

When he had enough of all the genocide against Christians and the mistreatment of peasants in the Shimabara area, Shiro led the defense of Hara Castle and defeated the strongest of the Shogunate attackers in a series of coordinated defensive surges. But, because the rebel force had no logistical support, their morale was seriously weakened in the following days. Shiro displayed posters in the castle in an attempt to enhance the morale of rebel force, saying "Now, those who accompany me in being besieged in this castle, will be my friends unto the next world."

A rebel soldier, Yamada Uemonsaku, betrayed Shiro and notified the Shogunate of the truth that rebel food supplies were becoming strained. The Shogunate forces performed a final assault, taking Hara Castle in the process. The Shogunate forces massacred almost 40,000 rebels, including women and children. Yamada, who previously betrayed his fellow rebels, was the only recorded survivor.

17-year-old Shiro was executed in the aftermath of the fall, his head being displayed on a pike in Nagasaki for an extended period of time afterward as a warning to any other potential Christian rebels. His last words were: "I shall return after 100 years and take my revenge!" Even now, many Japanese Christians consider Shiro as a saint, but the Roman Catholic Church has not officially listed him as such.

In media, Shirō tends to be portrayed as a girlish-looking Fallen Hero who endures soul-breaking hardships while fighting for his fellow Christians' freedom. He often ends up being Back from the Dead and having a Faith–Heel Turn after said breaking process, but sometimes is able to regain his faith in people as he dies.