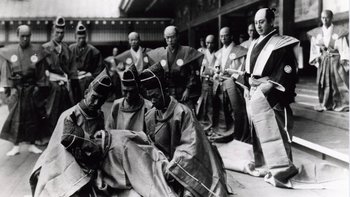 It is the year 1701. Lord Asano is preparing to host envoys of the emperor. Lord Kira, another high-ranking samurai and chief of imperial protocol, complains about how he was not asked to make arrangements, and insults Lord Asano. Lord Asano, outraged, draws his sword and strikes Kira, but does not kill him. For this, the local shogun orders Asano to commit harakiri and further orders the dissolution of his vast estates. This also renders all the junior samurai in Lord Asano's service unemployed, masterless samurai, or "ronin". Forty-seven of them, led by Kuranosuke, resolve on an elaborate plan of revenge.

The story of the 47 ronin is based on fact, and is one of the founding stories of Japanese nationhood, one that may be considered of similar significance as that of the Boston Tea Party in the United States. The timing of this film is significant. Part I was released four years into Japan's long, ugly war with China and just a week before Japan's attack on Pearl Harbor led to its involvement in a much wider Pacific war. The film, consequently, celebrates Japanese militarism and martial spirit.

Compare 47 Ronin (2013), a looser adaptation of the same story starring Keanu Reeves, or Chushingura, a color Epic Movie version of the story from 1962.