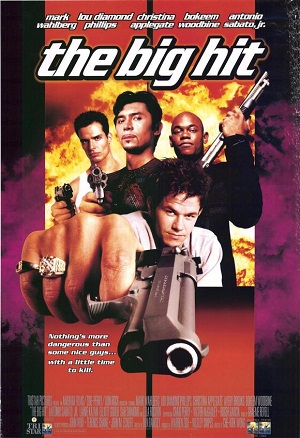 The Big Hit is a 1998 action comedy, directed by Kirk Wong. The director was previously known for such films as (among others) Health Warning (1982) and Crime Story (1993). The main stars were Mark Wahlberg, Lou Diamond Phillips, and Chin Chow, with key roles played by Lela Rochon, Christina Applegate, Avery Brooks, Elliott Gould and Sab Shimono.

It is the story of a Hitman with a Heart. Only that heart is causing him much trouble.

Melvin "Mel" Smiley (Wahlberg) is a mild-mannered man and a ruthlessly efficient Professional Killer, but his good nature allows his co-workers to take advantage of him. They alternatively ask him of favors, like disposing corpses for them, or claim credit and bonuses for his hits. He still earns good money from his job, but Mel is actually spending most of it in maintaining two seperate residences and live-in partners. The first is Chantel (Rochon), his African-American girlfriend, who is fully aware of his line of work and keeps making financial demands on him. The other is Pam Shulman (Applegate), his Jewish-American fiancée, who is unaware of what he does for living, but still wants him to support both herself and her formerly well-to-do family.

Cisco (Phillips), fellow assassin and supposed friend, on the other hand, is not pleased with earning a few thousand dollars with every hit. He therefore orchestrates a plan to earn himself at least a million from one simple job: abducting college student Keiko Nishi (Chow), the only daughter of wealthy businessman Jiro Nishi (Shimono), for ransom. In desperate need for some cash, Melvin reluctantly joins Cisco in this plan. What they don't know is that Jiro invested much of his fortune in creating a big budget film and promoting it, but the film bombed at the box office, Jiro has just gone bankrupt and is contemplating Seppuku. Even worse, Keiko happens to be the favorite goddaughter of Paris (Brooks) who just happens to be the local Don and the current employer of Melvin and Cisco.

What develops is their attempts to both find the kidnappers (which they can't do), keep people from finding out they're the kidnappers, trying to get the ransom, and keep their lives intact. Throw in some Stockholm Syndrome, a dash of backstabbing, and a number of reveals as Mel's life starts to fall apart, and you've pretty much got the idea.