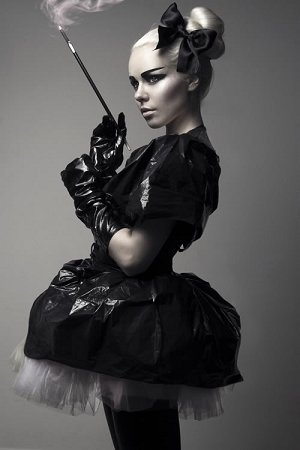 Eurotrash (...get it?)
Kerli Kõiv (born 7 February 1987 in Elva, Estonia) is a pop singer from Estonia, currently living in the US. Her music for her first album, Love is Dead, had a dark sound that ranged from depressing to a macabre-tainted uplifting sound. After becoming happier, she adopted a happier, more electro-pop sound. Time will tell on whatever this will elevate her popularity.
Advertisement:

In between her two major releases, she did two songs for two Tim Burton films: Alice in Wonderland (2010) and Frankenweenie. She also wrote Demi Lovato's "Skyscraper".

Kerli's fashion is known as "bubble goth", and her fans are called "MoonChildren".