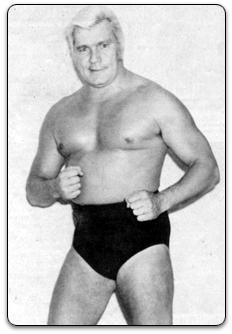 Pierre Clermont, better known by the ring name Pat Patterson (January 19, 1942-December 2, 2020) was a Canadian-American wrestler until right before the beginning of the 1980s explosion of WWE. It is his behind-the-scenes work during the modern era that has driven some of the concepts that are well-known today.

As a wrestler, Patterson was originally known for his Camp Gay gimmick in the NWA's San Francisco territory. This is Truth in Television: He really was gay, though in person he was more Straight Gay. He held the Tag Team titles there ten times with various partners, and San Francisco's U.S. title six times.

He joined the World Wrestling Federation in 1979, and quickly won the North American Championship from Ted DiBiase. It was then turned into the Intercontinental Championship, and he held it for about a year. He would retire from active duty in 1984, and become a referee.

Not long after retiring, Patterson went behind the scenes, and quickly became Vince McMahon's "right-hand man". He is best known as the progenitor of the Royal Rumble match, and often booked it personally early on. He was inducted into the WWE Hall of Fame in 1996.

He returned on-screen at the beginning of the Attitude Era as one of Mr. McMahon's mooks, alongside Gerald Brisco. At one point he won the WWF Hardcore Championship (at age 59), and once defended it in an evening gown match.

Unfortunately, he left WWE in official capacities in 2004 under accusations he had sexually harassed some of the men in the company. One of his alleged victims was Roddy Piper, who once accused Patterson of groping him in a shoot interview(which he later recanted). His reputation has been repaired since then, and he served in a consulting role with the company. He appeared on the WWE Network's reality show, WWE Legends House.

Some tropes involving the wrestler: