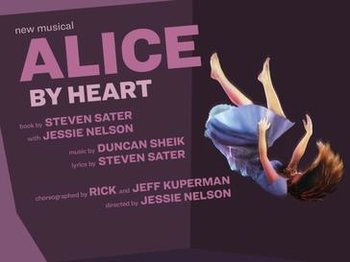 Now you're down the hole.
Alfred: I’ve got to reach the end, just this once more.
Alice: I thought that when you knew a book you had the chance to have it, as you always want to have it, in your head.
Alfred: It doesn’t always end as books would have it end. I’m a rabbit in a waistcoat, really, running out of time in Wonderland.
Alice: But how shall I be here without you now?
Alfred: That is the riddle...

Alice by Heart is a musical written by Spring Awakening composers Duncan Sheik and Steven Sater, with a book by Sater and Jessie Nelson. Originally premiered by the Royal National Theatre in London in 2012, it's had several other productions since then, including an Off-Broadway run in 2019.

In the wake of the London Blitz during World War II, Alice Spencer is forced to take shelter in a London Underground tube station. Her friend Alfred Hallam is also there, but is quarantined with tuberculosis. Desperate to keep him hanging on, Alice urges him to escape with her into the book that brought them together, Alice's Adventures in Wonderland. As the story plays out, the other people hiding in the shelter transform into the characters in the book.

A novelization of the musical, written by Steven Sater himself, was published in February 2020.