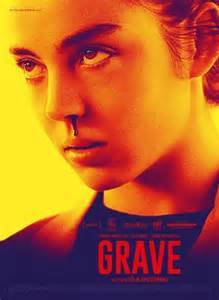 Grave (English title Raw) is a Franco-Belgian horror film released in 2017note it was presented at the Cannes festival in 2016. and the debut work of Julia Ducournau. It tells the story of Justine (Garance Marillier), a 16 year old girl entering vet school, which her older sister Alex (Ella Rumpf) also attends. Like the rest of her family, she's a vegetarian. What she didn't know was that her new school had a long tradition of hazing the freshmen, which she finds quite unpleasant, unlike her roommate Adrien (Rabbah Naït Oufellah) who just goes with it uncaringly. It becomes even more unpleasant when all freshmen are ordered to eat a raw rabbit kidney.

From then on, something awakens within Justine, who will have to struggle with her new compulsive taste for meat, her growing attraction for her roommate (in more ways than one) and her own sister's dark secret…

Has no connection whatsoever to the series Raw.