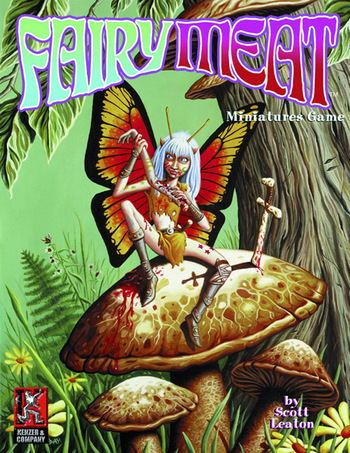 Once upon a time, fairies were peaceful, mischievous sprites who danced, sang and played, enjoying their typical diet of honey and fruit. However, fairies are nothing if not curious, and one day a fairy by the name of Merryzot decided to taste the meat of a dead mouse.
Advertisement:

Naturally, on the heels of this discovery fairies decided to see what all different types of meat tasted like. That was when they discovered that the most delicious meat came from other fairies.

Now the fairy tribes are locked in war, with each individual born with an addictive hunger for the flesh of their fellows.

Fairy Meat is a tabletop miniatures-based wargame published by Kenzer & Company, the mad geniuses behind Knights of the Dinner Table and Hackmaster.

In addition to the main game, there are four expansions: