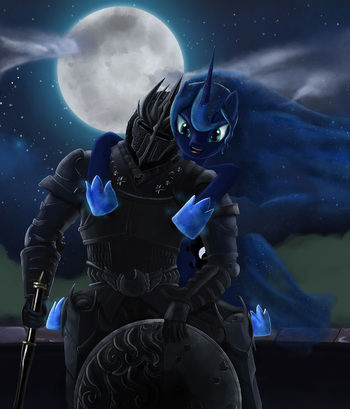 The Princess and her Lunar Guardsman
I am not a monster.
Advertisement:

is a My Little Pony: Friendship Is Magic Fan Fiction by Crimmar. It follows the story of Princess Luna and the lone human, Raegdan, through the eyes of Twilight Sparkle and her friends, as they try to establish a proper power-base behind Princess Luna, while facing assassination attempts, a mistrustful nation, and their own villainous tendencies.

With the progression of the story come hints that it is not the current threats that endanger them but past actions and repercussions threatening to catch up with them, while in the rifts through which Raegdan arrived something may be stirring for a long time now...