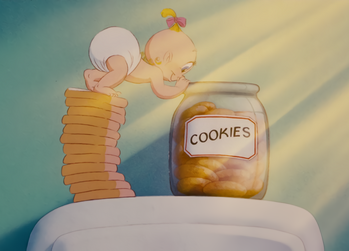 A cookie jar is just that: a countertop container of coveted confectionery crisps. But in old-fashioned Dom Coms, it plays a role as an appealing but unhealthy Forbidden Fruit. Trying to make an unauthorized raid for the cache of sweets is a stock act of misbehavior for Little Jimmy, especially if he's a Pint-Sized Kid and needs to account for the extra step of reaching the countertop (or worse, the top of the fridge) in a way that won't get noticed. Oftentimes, the offense is treated as a Felony Misdemeanor.

Not to Be Confused with the Impossible Pickle Jar. Usually a subtrope of Sneaking Snacks.