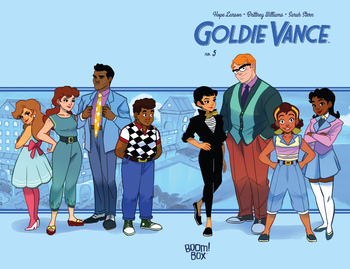 Goldie Vance is a comic book series written by Hope Larson and Jackie Ball, illustrated by Brittney Williams, Noah Hayes, and Elle Power and , and published by Boom! Studios.

The titular Marigold "Goldie" Vance is a 16 year-old “assistant” Kid Detective, serving at her father’s hotel the Crossed Palms Resort in St. Pascal, Florida. Using her sleuthing skills, talent for disguises, spunky kid charm, and network of clever and reliable friends, Goldie tackles all sorts of cases that come to the hotel, whether Russian spies looking to steal spacecraft secrets, to missing ex-astronauts with a grudge, or an allegedly haunted music festival.

A movie adaptation of the series

is being developed by Kerry Washington and Rashida Jones.