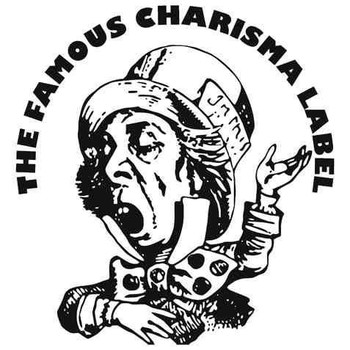 The "Mad Hatter" logo introduced in 1972.
"Charisma captured the very essence of British eccentricity. A label with the pastoral strangeness of early Genesis, the folk-pop of Lindisfarne and the jazz-rock of Van der Graaf Generator alone would be enough to guarantee its status, but to add in Rare Bird, Monty Python, Sir John Betjeman and myriad others underlines its importance to the counterculture of the United Kingdom in the 1970s."
—Daryl Easlea, from this label history

Charisma Records (or as it called itself, "The Famous Charisma Label") was a British record label formed in 1969 by journalist and manager Tony Stratton-Smith. It's one of the most fondly remembered companies of the "hippie" era; its eclectic roster allowed it to compete with larger indies like Island and Chrysalis, as well as major label "underground" imprints like Deram, Harvest and Vertigo.

Charisma is especially well-remembered for its two most popular acts, Genesis and Monty Python, but they're just the beginning. The label was a major force in Progressive Rock, releasing cult favorites such as Van der Graaf Generator, Hawkwind, Rare Bird, Audience, The Nice and String Driven Thing. Its stable also included Folk Rock (Lindisfarne) and Singer/Songwriters (Clifford T. Ward, Gary Shearston). Initially starting with a pink scroll label for their records, Charisma eventually switched to a design adapting John Tenniel's classic illustrations for Alice's Adventures in Wonderland, which sees use in CD rereleases to this day. Charisma also had some sublabels, including Utility (which released Billy Bragg's early work) and Pre (a subsidiary for New Wave Music and Reggae acts).

Charisma was acquired by Virgin Records in 1983, where it operated as Charisma/Virgin, then Virgin/Charisma, before finally being absorbed in 1986. The library would wind up being owned by EMI before being transferred back to Virgin when EMI got bought out by the Universal Music Group.

The Charisma trademark has been revived twice. In The '90s, Virgin created an In Name Only version of the label with a new logo whose acts included Enigma, Right Said Fred, Jellyfish, Kirsty Mac Coll, The Associates, Maxi Priest, Loudon Wainwright III, .38 Special, and The Knack, among others; there was also a Blues subsidiary, Point Blank, which issued some of the last recordings by John Lee Hooker. Later, after Charisma was brought back again (complete with a return to the Mad Hatter logo) for Van der Graaf Generator's reunion album Present in 2005, EMI kept it around for a while and signed a few new acts, most notably Alphabeat and A Fine Frenzy.