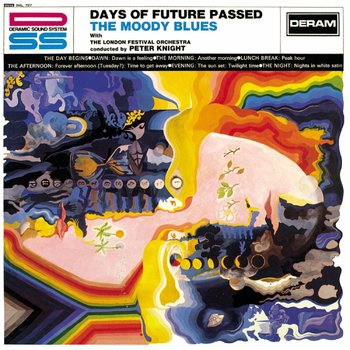 Nights in white satin, never reaching the end
Letters I've written never meaning to send
"Cold-hearted orb that rules the night
Removes the colours from our sight.
Red is grey and yellow white
But we decide which is right
And which is an illusion."
—"The Day Begins — Morning Glory"
Advertisement:

Days of Future Passed is the second studio album recorded by British rock band The Moody Blues. It was released through Deram Records on November 10, 1967, in the United Kingdom, and the next day in the United States.

It was also the first album to feature Justin Hayward and John Lodge after the departure of Denny Laine and Clint Warwick. Leading up to the album's release, The Moody Blues had faced financial difficulties after the debut album The Magnificent Moodies did not achieve commercial success, and Decca Records offered for the band to record an LP for their new sublabel Deram that intersperses their music with orchestral backing. The band went to work on a Concept Album involving a day in the life of an everyday man, with them and the London Festival Orchestra playing at separate times except in "Nights in White Satin".

The album sold steadily, no doubt helped with "Nights in White Satin" receiving regular radio play, which led to the single peaking at #3 on the Billboard Hot 100 in 1972. It is regarded as one of the earliest identifiable examples of Progressive Rock, especially with the incorporation of symphonic music.

Cold-hearted orb that rules the night
Removes the colours from our sight.
Red is grey and yellow white
But we decide which is right
And which is an illusion.