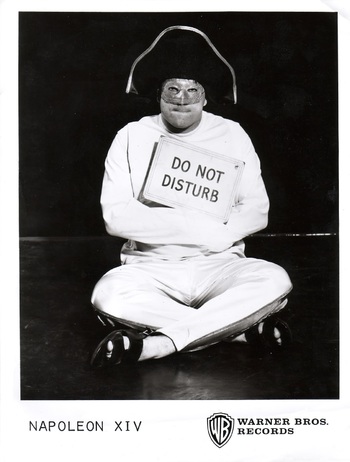 "Thoughts that need thinking like spring has been sprung
Fantasy helps all of us to think young
Everyone knows that penguins go formal
So who's there among us to say who is normal?"
— "Bats In My Belfry"
Advertisement:

Napoleon XIV was the pseudonym of the American singer and songwriter Jerry Samuels (born 3 May 1938, New York).

Samuels started out writing and performing normal love songs; he released a few pop records in The '50s, and Sammy Davis Jr.'s version of his song "The Shelter of Your Arms" became a Top 20 hit in 1963. However, the material he recorded as Napoleon XIV is very different. It consists of aggressively weird novelty songs focusing on mental illnessnote and in a few later numbers, marijuana, often featuring unhinged vocals, atonal "melodies", and minimalistic accompaniment. These songs are about as entertaining as they are creepy — and they can be pretty creepy. One of them, his Signature Song "They're Coming to Take Me Away, Ha-Haaa!", was actually a Top 3 hit in 1966 for two weeks. It dropped not due to lack of interest, but due to mental health experts stating the song was too real and that Samuels was being exploited somehow, and got it banned on radio.

However, Napoleon XIV met his Waterloo when a follow-up single ("I'm in Love With My Little Red Tricycle") and an album (titled after "They're Coming to Take Me Away, Ha-Haaa!") both flopped, and a second album intended for 1968 release (which would have been titled For God's Sake, Stop the Feces!) was canceled. Since then, Samuels has worked as a booking agent, although Napoleon XIV briefly resurfaced in The '90s with The Second Coming, a compilation that combined the 1966 album with tracks intended for Feces and a few new recordings.

"They're Coming to Trope Me Away, Ha-Haaa!":