Series / Do Not Adjust Your Set 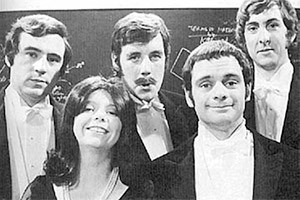 Do Not Adjust Your Set is a sketch comedy series produced by ITV affiliate Rediffusion (series 1) and subsequently Thames (series 2) for 29 episodes across two series between December 1967 and May 1969. It starred Denise Coffey, Eric Idle, David Jason, Terry Jones, and Michael Palin, with musical performaces by The Bonzo Dog Band; the second series also featured animated inserts by Terry Gilliam. Along with fellow Rediffusion sketch series At Last the 1948 Show and the comedy special How to Irritate People, it is regarded as one of the three spiritual predecessors of Monty Python's Flying Circus.

The most memorable recurring segment involved the adventures of superhero parody Captain Fantastic (Jason) and his nemesis Mrs. Black (Coffey), with the latter using the gadgets in her handbag to achieve world domination and the former trying to stop her with the gadgets in his magic umbrella; it proved so popular that it was incorporated into Thames Television's Magpie after DNAYS went off the air.

This series featured examples of the following tropes: