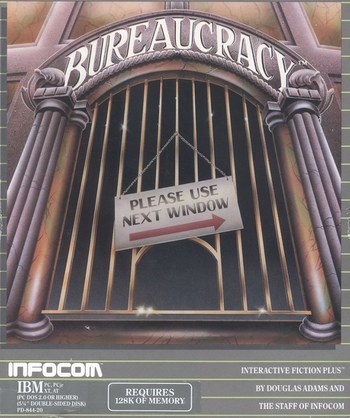 Bureaucracy is a work of Interactive Fiction, created by Douglas Adams and published by Infocom in 1987. You've just moved to a new town to accept a job from the Happitec Corporation. There's just one problem— you need your bank, Fillmore Fiduciary Trust, to validate your change-of-address form before you can catch a flight to Paris for a training seminar/vacation. Sounds simple, no?
Advertisement:

As the name implies, the game has you dealing with an increasingly absurd series of bureaucratic hurdles. Something's wrong with the mail delivery service, you can't access your bank accounts, annoying nerds are hounding you every step of the way... the list goes on.

Bureaucracy is unique from other interactive fiction titles in that it has a blood pressure mechanic. Your blood pressure rises every time something frustrating happens; if too much happens in a short span of time, you get an aneurysm and die.