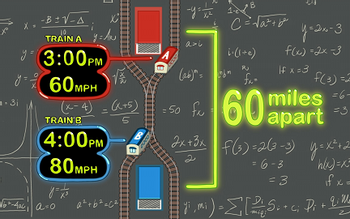 Frazz: I'm sorry. What was the question again?
Student: Now it's: Why are 40% of story problems and country songs about trains?
— Frazz
Advertisement:

The question is either:

Whatever the intended answer, it's quite likely someone will start asking for entirely irrelevant details.

One variant that pops up occasionally is "which train is closer to City A when they meet?" If the trains have met, they're in the same place, so neither is "closer" to City A. note Unless, of course, the train tracks are oriented in such a way that one train is "closer" by a few feet... ah, forget it. note  Or what the question meant was 'Given that Train B is travelling faster than Train A, will the meeting point be closer to (a) Tropetown or (b) Idiomopolis?'

Another variant is to have the question answered in a humorous or joking way, revealing the problem was not mathematical but merely the set-up to a humorous trick-question. Although not train-related, a common example is something like: "One man leaves Tropetown going 80 mph. Another leaves Idiompolis going 75 mph. Where do they meet? IN JAIL! Because the speed limit is 55!"

Often times, vital pieces of information are left out, such as the distance between the cities, or that Train B makes a 20 minute stop in Clicheville. Some irrelevant details may also be added, such as wind speed and direction "to account for wind resistance."note What fifth grader would even know how to calculate this? To show a character is smart they'll come up with these vital missing facts as part of their answer. The most common answer is normally something along the lines of "Who is the idiot that designed this railroad?"

This is (usually) not related to "the Trolley Problem", a philosophical question discussing The Needs of the Many. See also Writers Cannot Do Math, Everybody Hates Mathematics.