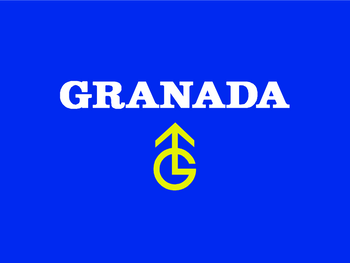 You're looking in on Channel 9 – Granada!
Advertisement:

Granada Television, now known as ITV Granada, although that name does not appear on air, was a Manchester-based broadcaster covering North West England (originally all the North), the Isle of Man and North Wales. When ITV's rules were changed to allow stations to buy each other, the entire network in England and Wales ended up being owned by Granada PLC and Carlton Communications, which were finally allowed to merge into ITV PLC.

Granada's Quay Street Studios - home to Granada since its earliest days - finally turned off its famous illuminated sign and closed permanently in 2013 when production was moved to Media City in Salford Quays. To mark the occasion, ITV broadcast a 90-minute retrospective called Goodbye Granadaland, complete with Granada front and end-caps (probably for the last time ever).

Shows made by Granada include:

A tuneful, little number, from Granada in 1968.

A tuneful, little number, from Granada in 1968.