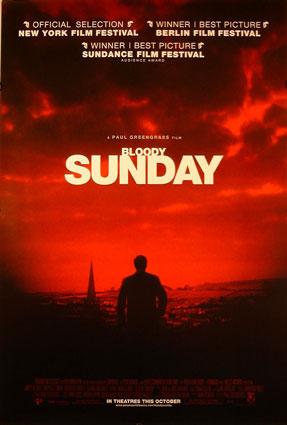 Bloody Sunday is a 2002 film directed by Paul Greengrass about the Derry Massacre in Northern Ireland. Initially a made-for-TV movie, it was released theatrically to critical acclaim.

On January 30, 1972, Catholic civil rights activists organized a peaceful march in Derry to protest their community's treatment by the local Protestant-dominated government and the British military forces. However, a brutal crackdown using live ammunition resulted in 13 dead. The film, in Mockumentary fashion, follows march organizer Ivan Cooper (played by James Nesbitt), a platoon of British paratroopers, and various participants, from morning till night, as the day's events unfold and go horribly wrong.