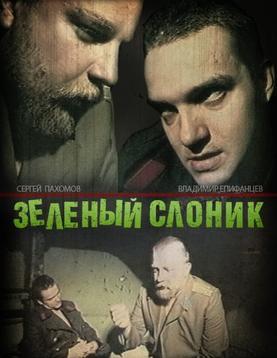 The Green Elephant (Зеленый слоник), also known as Green Elephant Calf, is a 1999 Russian arthouse gore/splatter film. It tells a story of two unnamed junior officers of the Soviet army, court-martialled into a military prison cell, with unfortunate consequences. Not just exploring themes of humiliation, army violence, suicide and coprophilia, but actually showing these things in close up. The film is forbidden in its home country from mainstream distribution circuits, but not from film festivals. Nevertheless, it can be easily found on YouTube. However, the main appeal of this movie is not as much in its graphic disgustingness as it is in its weird dialogue and absurdist humor, which is mostly Lost in Translation. For this reason the film gained notoriety, and somewhat of a cult following, in Russian internet, particularly imageboards. Quotes and monologues from the film are often used as copypasta.

I'm fucking fed up with your stories, I can't listen to them anymore. One story is more fucking amazing than another. About tropes, about some other shit, squick, the fuck are you talking about? Can you shut up? Became popular on image boards — gained cult following. The fuck? What are you talking about? Shit.